Six people, including two former managers with HBOS, were last week sentenced to a combined 47 years in jail for bribery and fraud.

Lynden Scourfield pleaded guilty to six counts, including corruption, and was sentenced to 11 years and three months, while five co-conspirators were convicted of bribery, fraud and money laundering.

Quayside promised small business customers that the consultants’ business expertise would improve their fortunes. In reality, it was Quayside that profited – with Mills and his wife Alison exploiting customers and taking £245m of HBOS’ money for themselves, to be shared with Scourfield and three others involved in the scheme.

David Mills was sentenced to 11 years, and Alison Mills to three and a half years.

Judge Beddoe described Scourfield as “utterly corrupt” and having “got his tentacles into the businesses of ordinary and honest people and [ripping] them apart without a thought for those affected”.

SFO toughens up on bribery

This case comes just weeks after British luxury-car and engineering firm Rolls-Royce was forced to pay £671 million to settle 12 counts of bribery against them. The firm had been under investigation by the Serious Fraud Office (SFO) before agreeing to take the enormous financial penalty to avoid prosecution.

“I think it shows very clearly that the SFO has teeth and that the SFO will not go away,” the office’s director, David Green, told the BBC last month.

The hard-line message from Mr Green provides a stark contrast to the way the SFO initially handled the HBOS scheme. Although the SFO had been alerted to allegations against HBOS back in 2007, it repeatedly failed to investigate.

Mitigate the risk of bribery in your organisation

The UK Bribery Act 2010 goes beyond just dealing with large-scale, multi-million dollar bribes; it also targets much lower-level bribery, affecting corporate hospitality, gift-giving and facilitation payments. While large enterprises may be able to afford extensive legal advice to put appropriate safeguards in place, this cost is likely to be beyond the reach of many smaller organisations in the public, private and third sectors.

While large businesses may be able to afford extensive legal advice to put appropriate safeguards in place, this cost is likely to be beyond the reach of many smaller organisations in the public, private and third sectors. For such companies, compliance with the ISO 37001 standard is a suitable alternative.

ISO 37001:2016 specifies the requirements and provides guidance for an anti-bribery management system (ABMS) for organisations of any size, type and location. ISO 37001 covers international best practice to help transform legislations into practical policies, processes and procedures. It is designed to help organisations in any jurisdiction put the correct anti-bribery practices in place and ensure that they are being implemented adequately.

Comply with your legal obligations and commit to the integrity of your organisation with the ISO 37001:2016 Anti-Bribery Management System Documentation Toolkit. 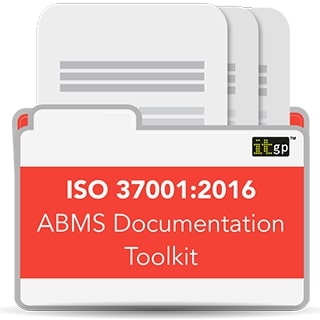 It contains all the templates, guidance and tools you need to implement an ISO 37001:2016-compliant ABMS.