The number of UK businesses that have suffered cyber attacks has doubled in the past five years, according to a new report.

Beaming’s Five Years in Cyber Security found that 1.5 million organisations fell victim to cyber crime in 2019. This equates to 25% of all UK businesses, compared to 13% in 2015.

Phishing and malware were the most common tools for cyber crime – and the larger the organisation, the more likely they were to fall victim.

But not all attacks are a case of criminal hackers breaking into an organisation’s systems. In fact, employees have been consistently responsible for a little over a third of breaches – whether through malicious intent or neglect.

The cost of cyber crime

Beaming calculates that UK business lost almost £13 billion due to cyber crime in 2019, and when you factor in damaged assets, financial penalties and lost productivity, the total cost over the past five years is more than £87 billion.

The report also found that, except for IoT (Internet of Things) attacks and cryptojacking, there isn’t a huge discrepancy between the cost of a breach and criminals’ attack method. 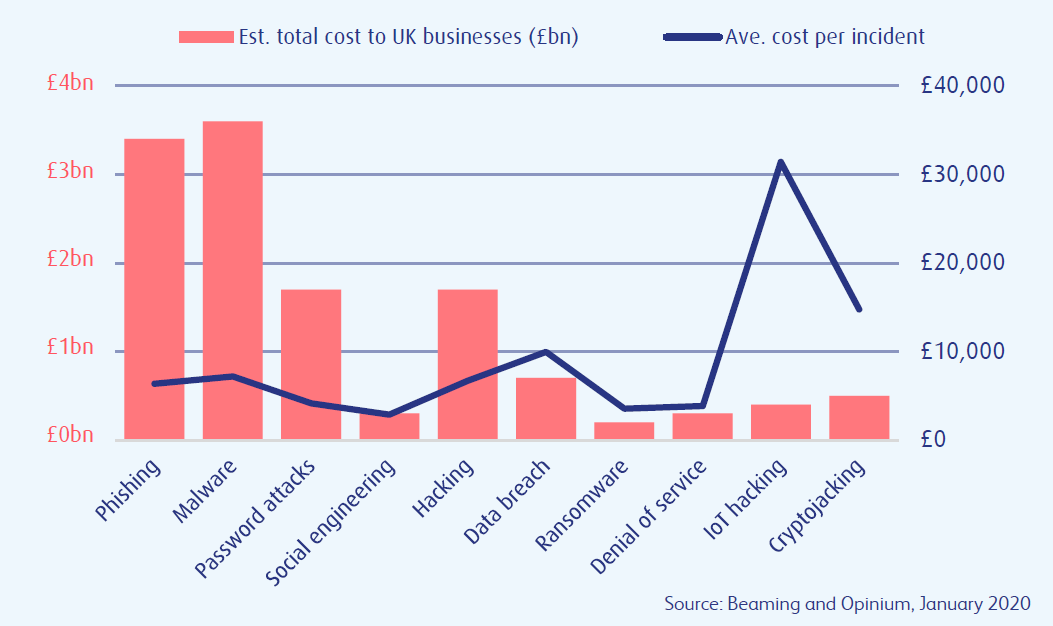 Organisations are fighting back

Although the number of cyber attacks has increased in the past five years, organisations of all sizes are doing a better job addressing the risks.

Beaming found that 20% of small businesses, 24% of medium-sized business and 36% of large businesses now discuss a range of threats at board-level, while the proportion taking additional steps to mitigate the threat has increased from 16% in 2015 to 37% in 2019.

Many of those organisations have correctly identified malware as a top priority, with 45% saying they’ve taken extra security precautions to tackle the threat, compared to 26% in 2015.

However, there is still a lot more that they could be doing. For example, the report found that:

Beaming notes that organisations should be taking a strategic, holistic approach to cyber security rather than identifying specific threats and addressing them as they arise.

That’s why it recommends ISO 27001, the international standard that sets out the specification for an ISMS (information security management system).

Independently accredited certification to the Standard is recognised around the world as an indication that your ISMS is aligned with information security best practice.

Our green paper Information Security and ISO 27001 – An introduction provides more information on the Standard and how it fits into your organisation.