Cyber crime has never been as prevalent as it is today: despite being the second most reported economic crime affecting organisations (according to PwC’s Global Economic Crime Survey 2016), the majority of companies are not ready to defend their assets and data yet – only 37% have a cyber incident response plan in place.

Half of SMEs interviewed by KPMG stated that they don’t think they would be a target for an attack. They couldn’t be more wrong. They are underestimating the potential commercial value of their information and sensitive data, as well as the possibility of being exploited to reach a bigger target – the Target data breach started from an intrusion in one of its small suppliers.

Brand reputation thrown to the winds

The biggest risk they face is reputational damage: once you lose your reputation with customers and suppliers, what’s left? 58% of consumers stated they wouldn’t deal with companies that have been breached; they simply wouldn’t trust them any more. The same applies to suppliers: 86% of them would remove the breached company from their supply chain. Can you afford to lose that much business?

Cyber Essentials certification, the solution to your problems 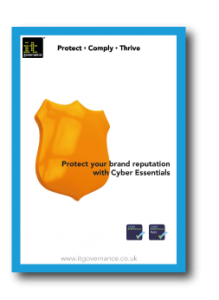 With the adoption of the Cyber Essentials scheme, the UK Government states that you could prevent around 80% of cyber attacks, reassuring customers and suppliers that their data is in good hands. But there’s much more: by implementing the five security controls, you will achieve a higher level of cyber security and gain a whole host of other business benefits that put your company above your competitors.

Download this short guide to discover why SMEs cannot afford to be cyber insecure and how Cyber Essentials offers benefits and secures future business. Download now >>