Less than 15 months remain for organisations to make sure their documentation is compliant with the requirements of ISO 14001:2015 and in place.

ISO 14001:2015 was published in September 2015, and organisations were given a three-year transition period to adopt the revised Standard.

Anne-Marie Warris, chair of the ISO subcommittee that developed and revised the Standard, explained: “Looking forward, the new version will help with a stronger integration between environmental issues and an organisation’s strategic action planning and thinking.”

The revisions redesigned ISO 9001 to respond to the latest trends and aligned it with the Annex SL high-level structure, so that it can be integrated with other management system standards, such as ISO 14001. 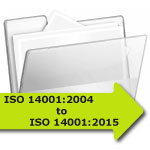 Digital Marketing Executive at IT Governance