ISO 27001 certifications have grown 20%, according to the recently published ISO Survey.

Globally, 27,536 certificates were issued during 2015 compared to 23,005 the previous year. This is the first year since records first began in 2007 that there has been such a large jump in certifications. 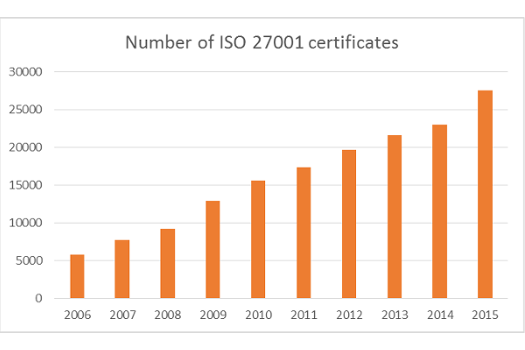 This biggest increase in certifications has come from North America (+78%) and Africa (+63%) which now have 1,445 and 129 certificated organisations respectively.

Organisations within East Asia and Pacific still hold the highest number of certifications at 11,994, which is mainly due to the fact that under local privacy laws it is mandatory for Japanese businesses to hold ISO 27001 certificates.

Why the sudden rise?

As data breaches and cyber attacks continue to threaten businesses, organisations worldwide are recognising the need of having an information security management system (ISMS) that is accredited to an internationally-recognised Standard to prove to stakeholders that they take cyber security seriously.

In 2015 alone, there was a multitude of high-profile data breaches that rocked major organisations, including:

ISO 27001 certification is often a supply chain requirement and, as such, can help organisations broaden their client base and supply chain network, while supporting business opportunities in international markets where the Standard is recognised.

Implementing ISO 27001 in your organisation

To help your business implement an ISO 27001-compliant ISMS, our packaged solutions will facilitate your project at a speed and for a budget that is appropriate for your individual needs and preferred project approach.

Each fixed-price solution contains a combination of products and services that can be accessed online and deployed by any company in the world.