I was recently reading an article from 3M on the application of privacy filters in the public sector, I thought I would share it with you….

Government departments appreciate the visual data security threats that come with mobile working. Privacy filters and screen protectors provide a cost-effective and easy to use tool for risk mitigation.

A growing number of workers are likely to access files and data while on the move using connected mobile devices such as smartphones, netbooks, tablets and laptops. Although there are tremendous benefits for productivity, corporate and personal data can be more easily stolen directly from a screen when being viewed in a public place.

According to the 2011 Global Information Security Workforce Study by Frost and Sullivan, mobile devices have become the second biggest security concern for information security professionals, behind only application vulnerabilities. However, a survey conducted as part of the recently published Visual Data Breach Risk Assessment Study – performed by People Security and commissioned by 3M – found that 70 per cent of corporations have no explicit policy on working in public places. Moreover, an experiment performed as part of the same study showed that although workers say they believe visual privacy to be important, many do not take steps to preserve it.

Whenever staff are working in non-secure locations, such as on a train or in a cafe, information displayed on the screen can be seen by others who happen to be nearby. This exposes potentially sensitive data, such as customer account details or corporate strategy documents to the risk of theft or unauthorised distribution.

A 2010 study by The Privacy Officer and Symantec Corporation (The Privacy Officer and Synamtec Corporation – 2010 Annual Study: UK Cost of a Data Breach) estimated the average cost of data breaches, to UK commercial organisations, at around £1.9 million per incident. The cost can be particularly high where legal obligations require the company to notify its customers of the breach and replace compromised data such as credit card details or account login codes.

However, unauthorised access to information used by government workers may have even more serious consequences, as it could compromise the security or safety of citizens, officials, political parties, or numerous national interests either in the UK or around the world.

Recent high-profile cases involving stolen or misplaced disks and laptops have shown just how vulnerable data becomes to theft when taken outside the office. With the rise in mobile working affecting government departments as well as commercial organisations, government information could be captured directly from a screen – using a camera phone, for example – with no physical theft having taken place. The breach may go undetected until unauthorised use of the stolen information becomes apparent.

If all MPs are also now to be equipped with an iPad to save money through paperless working and document sharing, a suggestion reported in The Times in February, the risk that sensitive information could become exposed while accessed on the move within Westminster or throughout members’ constituencies could increase further.

Even when working within government premises, accessing data in an open-plan area where it can be seen by colleagues who do not have the appropriate security clearance can present an unacceptable security threat.

Government departments are aware of the threat and are implementing a number of measures including training as well as privacy filters to protect sensitive information from visual data security breaches.

The Cabinet Office is responsible for setting all central government IT security policy. According to Francis Maude, the Cabinet Office Minister, the UK’s National School of Government holds specific courses designed to promote awareness to civil servants of the threat posed. He has also commented that privacy filters are available where considered necessary for those working inside and away from the office.

The Foreign and Commonwealth Office (FCO) is another department using a combination of awareness and privacy filters to overcome the threat. The minister David Lidington has said that privacy filters are available to FCO staff and their use is promoted to mitigate the risk.

The Rt Hon Chris Grayling, Minister of State for Work of Pensions, has commented that his Department “takes most seriously its statutory responsibilities to ensure that personal data and other sensitive information is properly safeguarded”.  He indicated that the Department is using a range of measures, including the use of privacy filters for portable computers to ensure data security.

Other departments such as the Department of Justice, Department of Health and the Treasury have also indicated that they place high importance on visual data security and make staff aware of risks through combinations of briefings and training.

A Privacy Filter can be applied as a screen overlay to prevent viewers not directly in front of the screen from seeing the information displayed. The filter also protects the LCD screen and reduces glare to provide the user with a comfortable and confidential viewing experience. 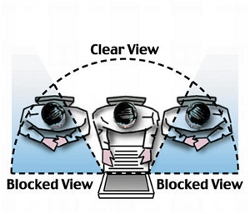 Diversified technology company 3M has a broad range of privacy filters, in black or premium security gold models, which can be provided in a wide variety of screen sizes for smartphone, netbook, tablet, laptop or desktop applications. They are optically designed to present a completely obscured screen to unwanted viewers, thereby providing effective protection against visual data security risks. Used in combination with other measures such as awareness training and appropriate policies governing mobile working, the Privacy Filter is a valuable part of today’s IT security toolbox.

We have Gold and Black 3M Privacy Filters now available at IT Governance. Click below to find out more and watch exclusive videos: