The BBC reports that nearly “90 workers are being investigated at the [Firstsource] call centre in Londonderry amid accusations of a data protection breach”.

BBC Radio Foyle saw a letter sent by the company to one of its workers, accusing him of mis-selling products and fraud. 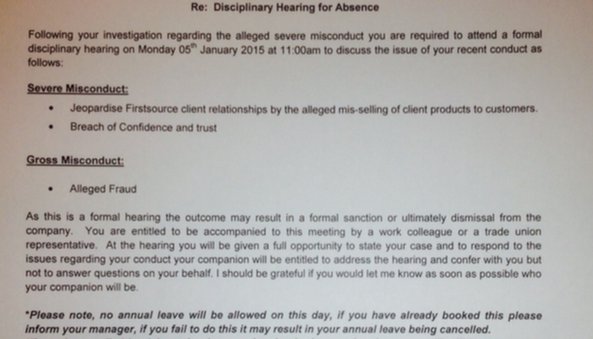 A spokesman for Firstsource said that “A number of policies and procedures may have been breached by members of staff… We cannot comment on the detail of the investigation until it has been completed.”

“There is a constant pressure of having to do things you’re not happy with. They add different procedures and policies making it difficult for people to achieve their monthly bonuses.

“Workers are finding it difficult to manage their day to day work.

“I want management to re-consider these suspensions.”

It’s not known how much information was lost, what products were mis-sold, or how the alleged fraud was perpetrated, but the suggestion that the data breach resulted directly from company culture is a strong accusation.

“In response to the huge number of allegations that have come about recently; I wish to state categorically that the vast majority of what is being said is completely false or exaggerated. If what has been suggested was anywhere near true, I have no doubt at all that Firstsource would have ceased to operate in the UK a staggeringly long time ago because these allegations constitute huge breaches of UK labour laws. I do not believe that most of the accusations levelled at Firstsource are true.”

All UK organisations that hold or process personal data must comply with the requirements of the Data Protection Act 1998 (DPA). Failure to do so can result in fines of up to £500,000 by the Information Commissioner’s Office. If you’re concerned about fulfilling your DPA obligations, please see our DPA resources – including our DPA Foundation Course, which will train your staff to comply with the eight obligations of the Act. Click here for more information >>