Douglas Adams, as I’m sure you know, came up with three rules to describe our reactions to technology:

For many adults, the Internet falls firmly under Rule 3. For children, the Internet is just “a natural part of the way the world works” – so much so that technically literate children are easily capable of hacking unsecure public Wi-Fi, which a new public awareness campaign has proven. 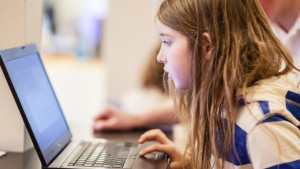 Seven-year-old Betsy Davies managed to hack a laptop via an open Wi-Fi network in just over ten minutes, having learned how to set up a rogue access point and eavesdrop on traffic in an online tutorial.

Marcus Dempsey, the ethical hacker who oversaw the demonstration, said:

“The results of this experiment are worrying but not entirely surprising. I know just how easily a layman can gain access to a stranger’s device, and in an age where children are often more tech-literate than adults, hacking can literally be child’s play.

“Adults need to get their heads around online security basics – and stick to them whenever they connect to an unsecure network. As for children, while it’s admirable educators are focusing on skills like coding, it’s important to teach them about the dangers that lurk online, as well instilling a clear sense of the ethics. After all, as easily as one can now code a computer game, so one can fall into the dark world of hacking.”

There are approximately 270,000 open Wi-Fi spots in the UK, which are used by nearly two-thirds of the population. According to research by hidemyass.com, the VPN provider that organised this hacking exercise, one in five Brits (20%) use public Wi-Fi weekly – or more frequently – to bank online (19%), shop (25%), send emails and documents (31%), and use social media platforms (50%). It’s no surprise, then, that recent Cabinet Office figures show that over half of Britons had fallen victim to cyber crime.

IT Governance’s ISO 27001 packaged solutions provide ISMS implementation resources for all organisations concerned about information security. These fixed-price packages enable any organisation to implement ISO 27001 at a speed and for a budget appropriate to its needs and preferred project approach.