If you were to ask me a couple of years ago what I pictured a black hat hacker to look like, I’d have said: 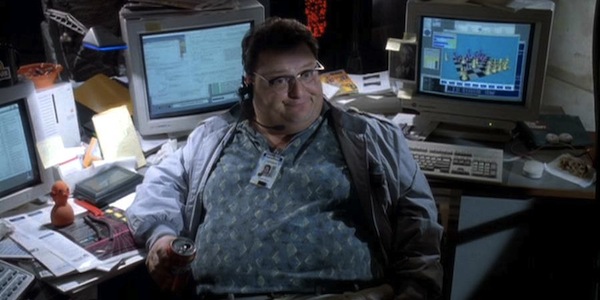 For the unaware, this is Dennis Nedry; the hacker from Jurassic park who steals the DNA secrets of the Jurassic project to sell them to a competitor.

In terms of his motive i.e. being paid by the competition, Jurassic Park got it spot on. However, their portrayal of a hacker’s appearance is what bothers me.  Let me explain. Unfortunately for Dennis his appearance is one which is usually associated with the ridiculous misconception of what a computer genius looks like.

It doesn’t take a genius to be a hacker

A quick google search of “how to hack into a website” will bring up over 98 million results – doesn’t take a ‘computer genius’ to use Google.

The first result takes us to a website well known for its tutorials, Wikihow. The page takes the reader through a very simple tutorial of how to break past a website that requires a login, providing access to what should be confidential information.

These instructions are incredibly simple and can be followed by anyone; an accountant, football player, chef or even my Nan. This particular hack doesn’t require much computer knowledge whatsoever and unfortunately for most organisations, neither do most hacks.

You can’t censor the Internet, meaning that cyber space is beyond anybody’s control.

Governments can perhaps control what is deemed illegal on the Internet, but only under their jurisdiction. So if someone in New York wanted to access a website about how to hack into an ecommerce site, then they would just use a secure browser such as TOR and access a server based in another country which doesn’t censor what’s on the internet.

Hacking as a service

As I mentioned above, knowledge of computer systems isn’t needed to know how to hack and thanks to software, neither is time. There is hacking software available on the black market which automates 99% of an attack, meaning that the user only has to provide a computer for the software to run on and click a few things now and then.

Hacking software can be purchased for as little as £50 and you’ll be surprised to know that some come with the option of support packages.

That’s right, you can actually speak to someone if your hacking software isn’t work – and they’ll help you.

Hackers Are Not After My Information

Why not? In most cases, black  hat hackers are not interested in the people or organisations they are hacking. Their software has searched the internet for websites that have a specific vulnerability and they hack those.

Everyone Is a Target for Hackers

It would be wrong to think that cyber attacks are only carried out against large organisations by computer nerds such as Dennis. With the information that’s available on the internet, anyone can be a black hat hacker and everyone is a target.

Cyber security awareness is important in your personal life too. How do you know that your employer is doing the best to look after your information? I bet you’ve logged into your social media account at work, or worse, your bank account – are you 100% sure that your computer is secure? After all, it’s a work PC and you probably haven’t got any knowledge on what protection you have.

Ask your IT department what they’re doing to protect your information and if they don’t come back and say “we’re ISO 27001 certified” – then direct them to www.itgovernance.co.uk/ISO27001